The park trial can be accessed form the back of Blue Forest Lane B&B, or on Blue Mountain Dr. at the entrance of the Terradore Trail.

Mushrooms grow under the shady roof of the forest along with pine cones gathered by squirrels laying on the forest floor.
The smell of the forest was pulpy. We were walking through an umber-green, forest. It reeked of age. Its woody scent was from centuries of snapping branches crashing to the forest’s floor and rotting silently. The composting, organic smell rose up in waves like a miasma. moss growing everywhere. Every sprawling tree we passed under reminded me of a watchful guardian, a silent sentinel of the groves.

The foliage became thick and lush, forming an arch of fairytale-green above our heads. Arthritic boughs, gnarled with age, dripped their bounty of nuts onto the path. Ferns, brambles and moss covered stones flanked the trail. Shuffling noises came from deep in the interior, deadened by the cunningly woven web of leaves. Many couples of darting red squirrels crossed the winding trail in front of us at one point. They were finishing up their early morning foraging and looked startled to see us. 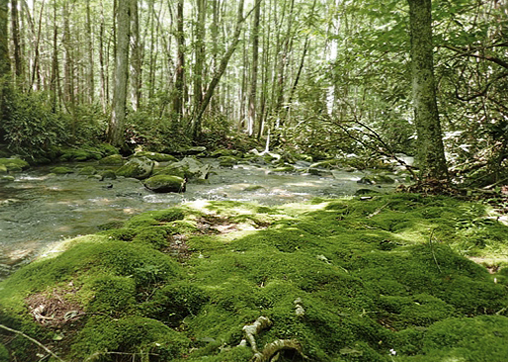 Blue Mountain-Birch Cove Lakes Wilderness Park
The Blue Mountain-Birch Cove Wilderness Area Is a large wilderness area with plans to create a full trail system extending from Blue Mountain to Susies Lake.  Once/If completed this area will be the largest urban park in North America.  Right now it can be difficult to find your way around.  Blue Mountain is one access point (albeit un-marked).  It can be a little intimidating because it isn’t marked, there aren’t official trails yet, and it ventures into remote, backcountry terrain. Keeping track of your navigating is a must, but you don’t need to be a seasoned pro to find your way to the top.

A Halifax Hidden Gem
The fact that there was extremely limited info on this trail when I researched it, tells of what a hidden gem it is.  It’s within a 30-minute drive from downtown Halifax, at the edge of the Kingswood subdivision in Hammonds Plains. The trail takes about 40 minutes to reach the top, and once there you are rewarded with a view of Halifax that you likely didn’t know existed.  I wouldn’t exactly call it a mountain by the true definition, but it certainly is by mainland Nova Scotia standards. The peak of the ‘mountain’ is the highest point of Halifax’s Chebucto Peninsula.

Rugged, Un-Marked Trails
The walk is not extremely difficult and the proper trail is almost always visible and occasionally marked with flagging.  There is at least one turn that is easy to miss, so you do have to pay close attention to your navigating. There will be muddy sections, stream crossings and/or a river to cross, as well as some minor climbing. The impromptu bridges should be taken with an abundance of caution.  Large granite boulders aka  glacial erratics, are increasingly scattered throughout as you progress into the wilderness.

The land is partly Barrett Lumber property so it’s somewhat in flux with its former clear-cuts and logging roads. It’s with their permission that it is possible to access this area despite being recommended as being a key part to the Blue Mountain-Birch Cove Lakes Wilderness Park. The city of Halifax has recently purchased parcels of this land as it slowly works to make the park a reality. If, and when it’s ever created, this trail is sure to be an important cornerstone.

Long Threatened
There have been mentions of running a new multi-million dollar freeway (highway 113) right through the heart of this trail. Beyond ruining an irreplaceable gem, and reneging on the commitment to the wilderness park, it should never happen for a number of other reasons. Once a proposed open-pit quarry, and scarred by clearcut forestry, this area has long been under threat.

A short commute from the city core helps this hike fit into limited time budgets.

Blue Mountain is an enjoyable hike any time of year, especially Spring and Fall when the lookoff is perched atop a sea of colour. You can expect plenty of bugs in Spring and early Summer so come prepared. The top clearing can be windy and significantly cooler than the rest of the hike but in favourable conditions its an ideal place for a pouch couch to.