Only 45 minutes from Halifax, a day trip to the Annapolis Valley is something not to be missed.
We have listed a few of the best sites and places to visit.
All of the site are very close to one another so it is quite easy to visit all of them. 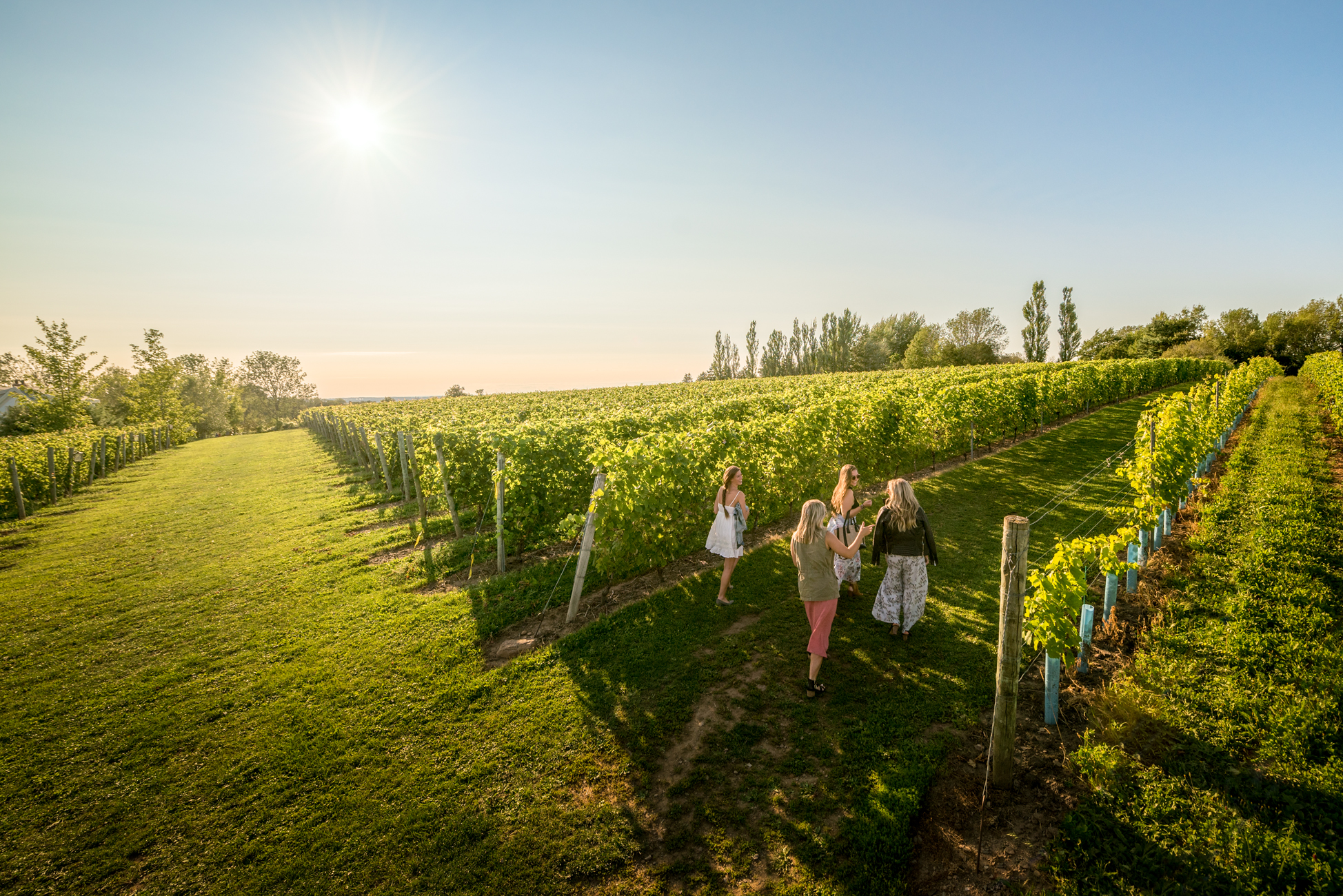 Nova Scotia has a long and rich tradition of growing grapes for wine that dates back to the 1600s, when this was one of the first areas to cultivate grapes in North America. The climate and soil conditions in Nova Scotia favour unique and distinctive grape varietals. Taste L’Acadie Blanc, Seyval Blanc, Lucie Kuhlmann, New York Muscat, and Baco Noir on a patio overlooking a vineyard.

When you walk through Nova Scotia Wine Country’s lush vineyards,
you’re never more than 20 kilometers from the ocean.

Situated on one of the cooler climate limits for vines, Nova Scotia’s soil and mesoclimates create some of the most distinctive premium-quality grapes in North America.

Our wineries have garnered international acclaim for their efforts and genuine passion. There are over 70 grape growers and more than 800 acres under vine in seven different regions across the province.

We have a long and rich tradition for growing grapes for wine dating back to the 1600s, when this was one of the first areas to cultivate grapes in North America. 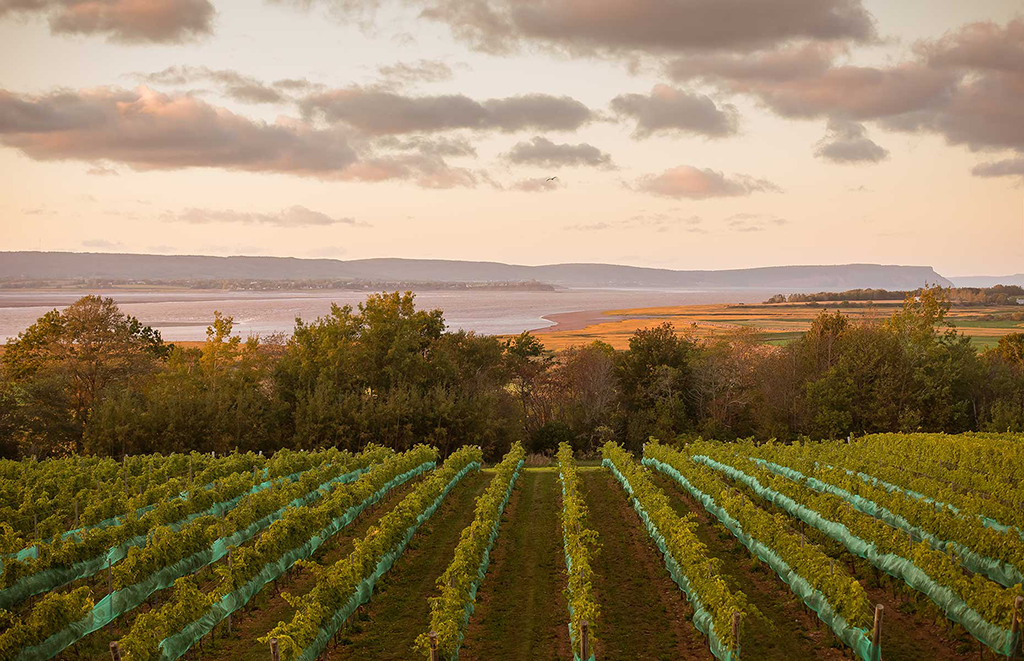 Nova Scotia has a long and rich tradition for growing grapes for wine dating back to the 1600s, when this was one of the first areas to cultivate grapes in North America.

The ice age nearly 2 million years ago shaped our unique land and soil, and over the centuries, the moderating effect of the Atlantic Ocean has created vineyards unlike any others in the world. It’s only been recently though, over the course of the past 25 years, that our modern wineries have especially flourished. 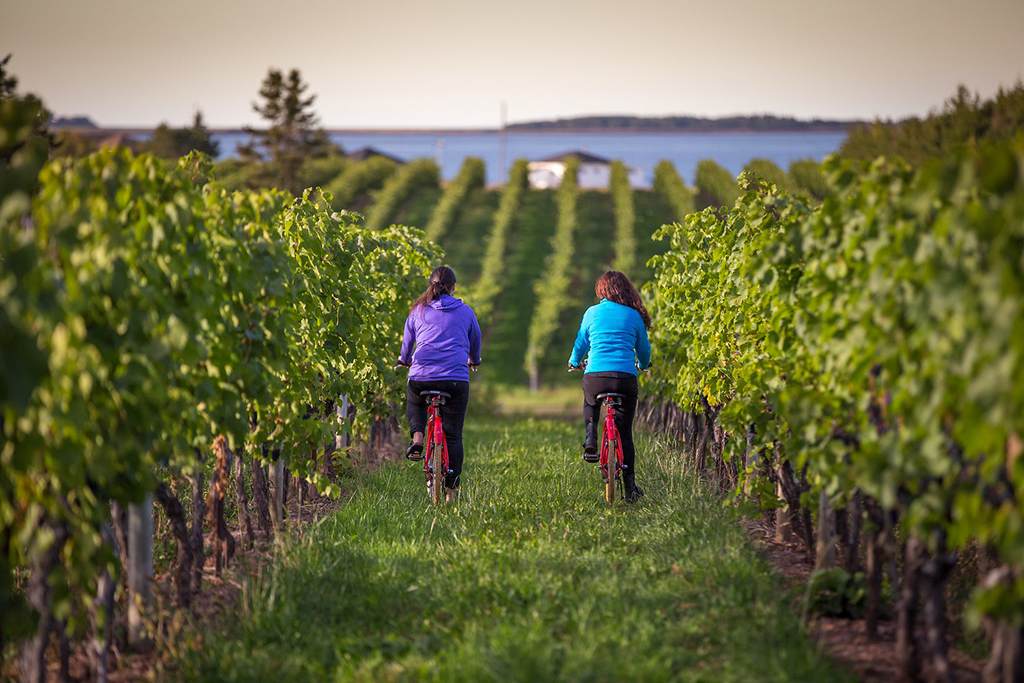 Situated on one of the cooler climate limits for vines, Nova Scotia’s soil and mesoclimates create some of the most distinctive premium-quality grapes in North America. Our wineries have garnered international acclaim for their efforts and genuine passion.

Our warm summers and long falls create crisp wines with bright acidity and aromatic complexities. Constantly being recognized as distinctly Nova Scotian, the combination of these unique characteristics led to the development of the first appellation in the province, Tidal Bay, officially launched in June 2012.

There are over 70 grape growers and more than 800 acres under vine in seven different regions across Nova Scotia: 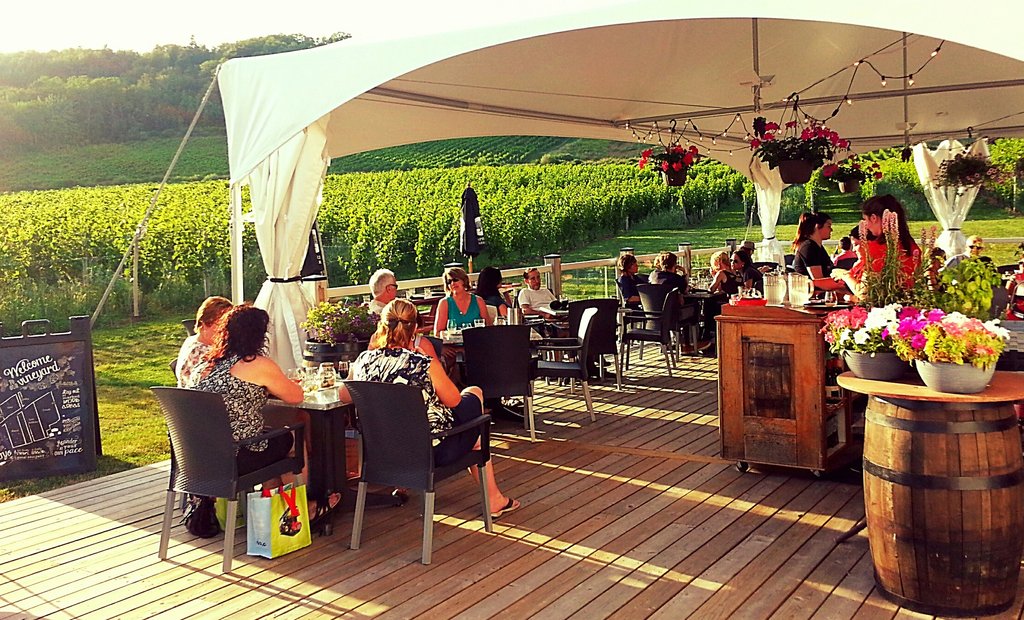 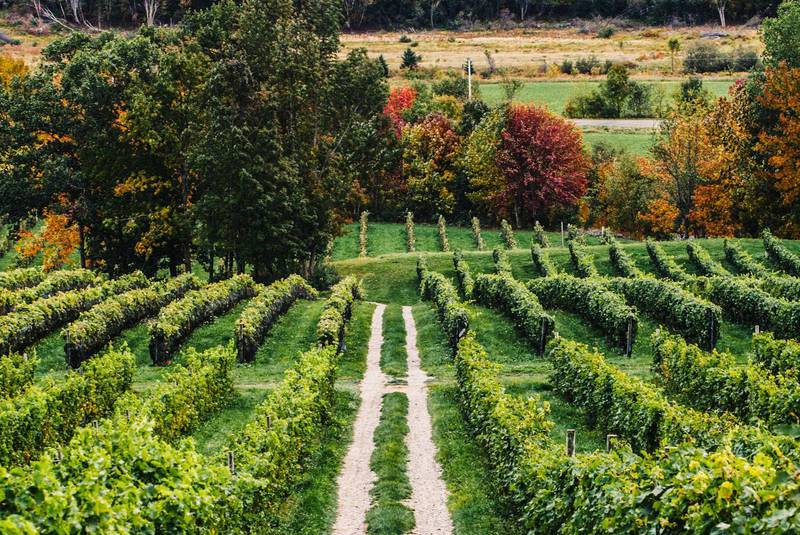 When you walk through Nova Scotia Wine Country’s lush vineyards,
you’re never more than 20 kilometers from the ocean. Enjoy discovering wines that display an exciting, unique terroir and perfectly compliment the delicate flavours of our land and sea. Wines that are aromatic with a mineral-like quality and a beautifully dry and crisp acidity.

Discover off-the-beaten-track country lanes that meander through hidden, beautiful valleys. Find a patio perched on the edge of a vineyard and enjoy a salad of fresh garden greens, local goat cheese or some of Nova Scotia’s famous smoked salmon. 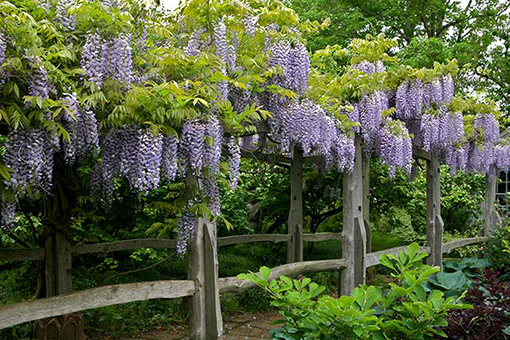 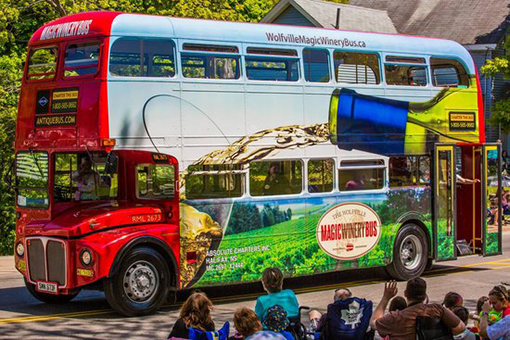 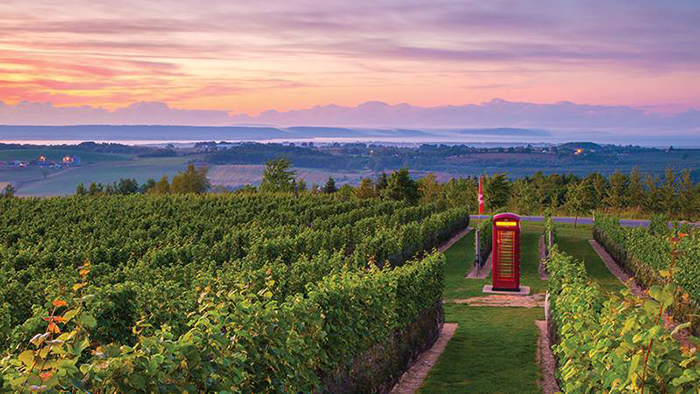 The Wolfville Magic Winery Bus
a classic British double-decker – will whisk you away for an incomparable day of tasteful adventure in the heart of Nova Scotia wine country.

Our bus travels in a continuous one-hour loop all day (each time passing through Wolfville). Hop off and expect to be at each winery for about an hour, with enough time to visit five wineries (on the 10:30am and 11:30am departures). 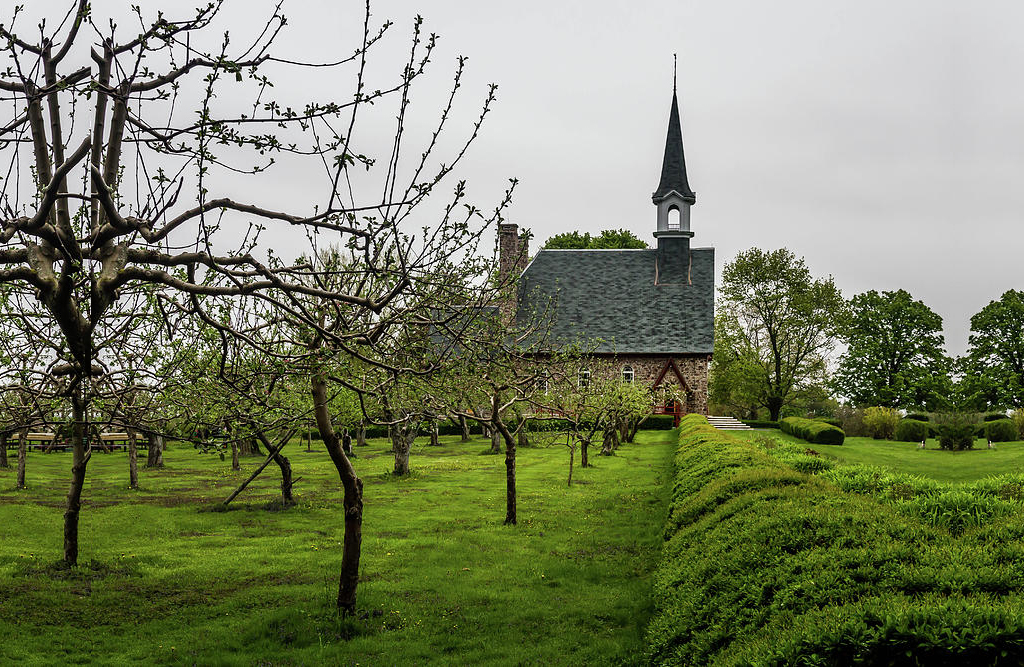 Grand-Pré is a powerful monument that unites the Acadian people. Visitors to the site will uncover the tale of Le Grand Dérangement: a tragic event in Acadian history that has shaped the vibrant culture of modern-day Acadians across the globe through its quiet but powerful renaissance. The site commemorates the Grand Pré area as a centre of Acadian settlement from 1682 to 1755 and the Deportation of the Acadians, which began in 1755 and continued until 1762. For many Acadians throughout the world, the site remains the heart of their ancestral homeland and the symbol of the ties that unite them to this day. 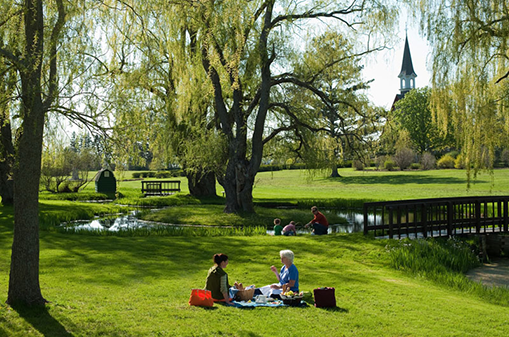 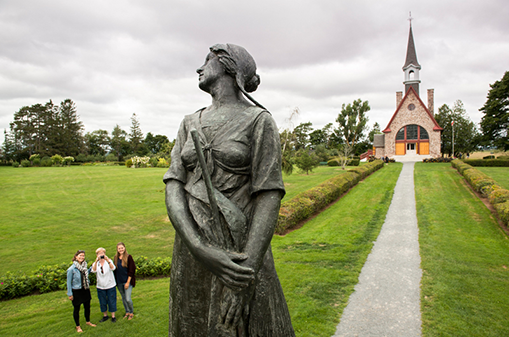 Embark on a fascinating journey with a guided tour! Your exploration begins in the hull of a Deportation ship, for a state-of-the-art cinematic introduction. In July and August (twice daily), interpreters will guide you through the history and significance of this national historic site. You'll explore serene duck ponds bordered by majestic weeping willows, the legendary statue of Evangeline (heroine of the Longfellow poem) and the Memorial Church. End the day by taking the path up the hill to the Landscape of Grand Pré View Park. You'll understand how this area got its name, Grand Pré, meaning great meadow, and why it became Canada's 16th World Heritage Site inscribed by UNESCO in 2012. 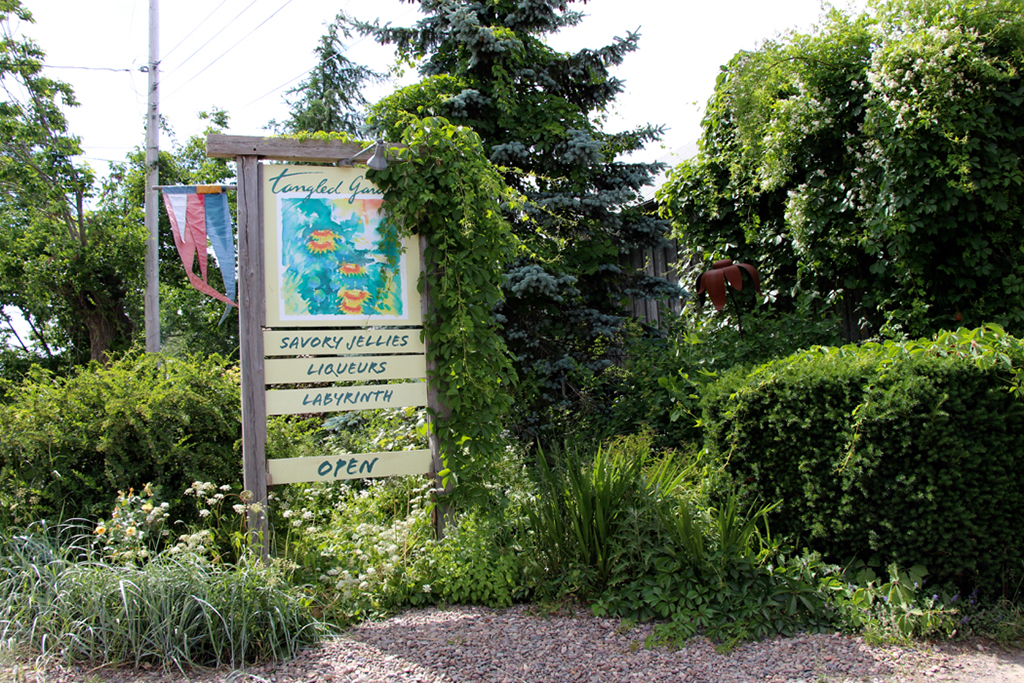 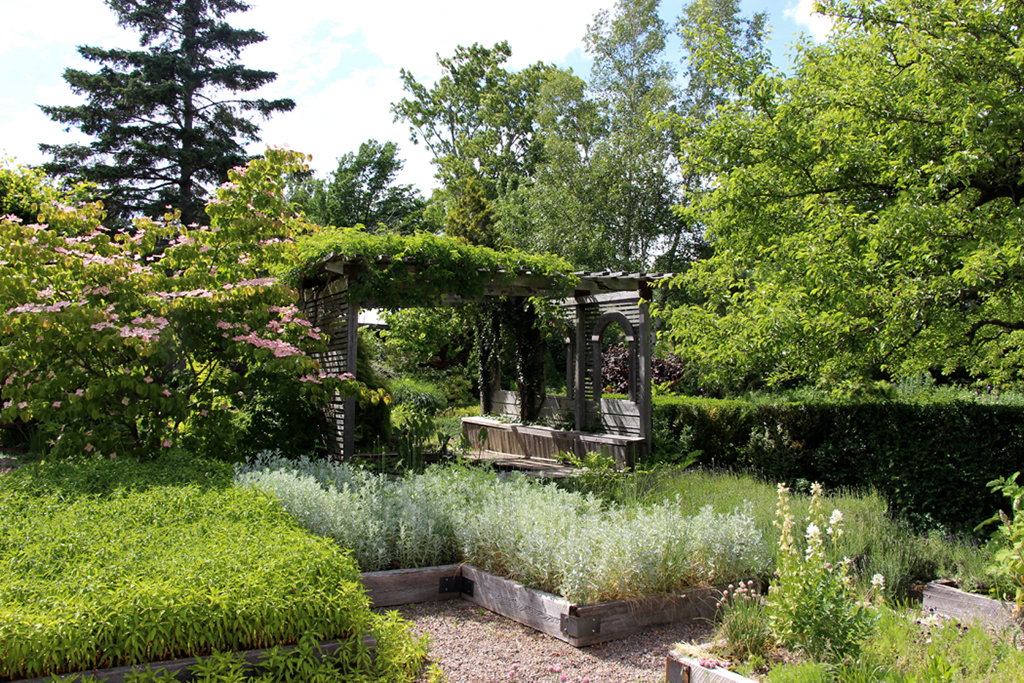 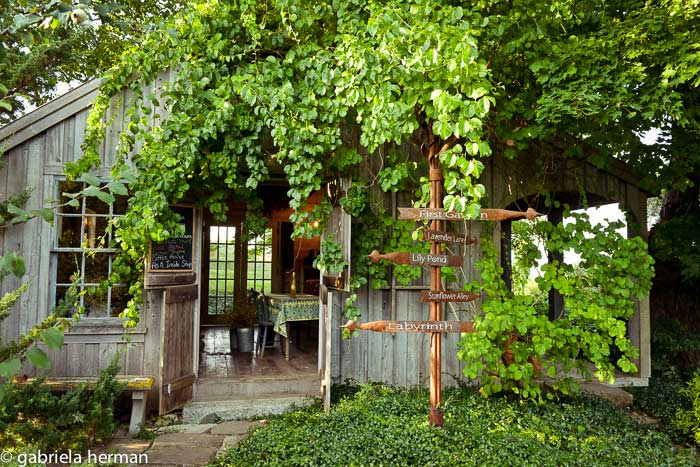 Our garden is a Nova Scotia tourist destination.

Thirty years in the making, Tangled Garden has grown out of one woman's passion for beauty and flavour. Wander through classic garden rooms hedged in box, yew and beech. Explore a dry stream bed flanked by statuesque grasses and perennials. Walk the flowering labyrinth then pause on a bench with sweeping views of the Bay of Fundy.  Meander down a wonderland of garden paths that change in their glory throughout the season. Sculptures will surprise you along the way. 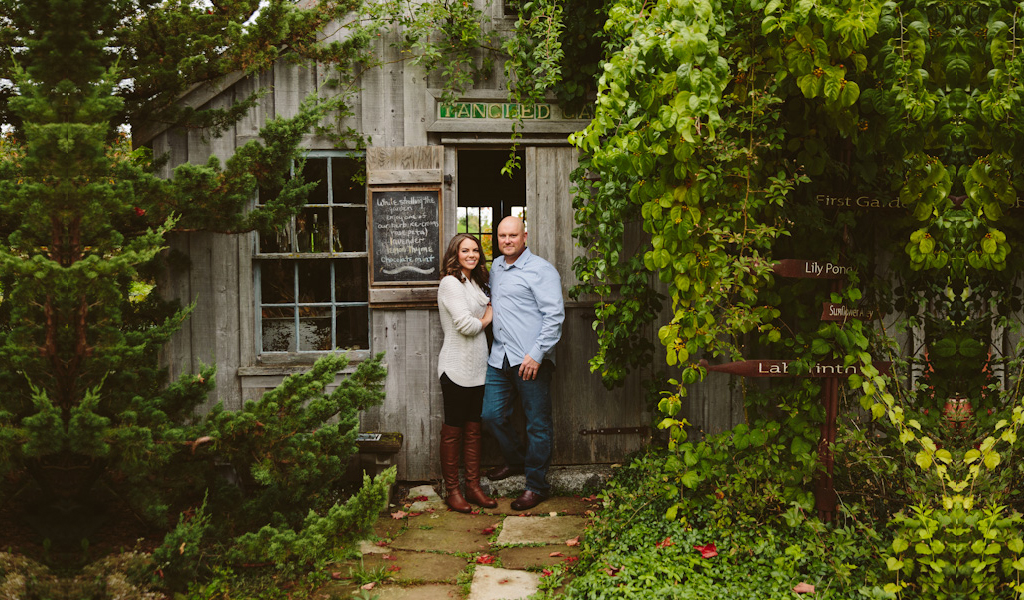 One summer, for a Tangled Garden hosted event, Jane McInnis, keeper of recipes and Beverly’s longest-standing employee, turned the garden shed into an old-fashioned apothecary’s shop.  Too beautiful for wheel barrows, no one wanted to turn it back into a shed. So, the tea room was born, the idea at least.  It took Lisa Boehme, enthusiastic do-er and attentive host, to make it a reality.

Now you can sit in this charming little building in the midst of the garden, sipping tea or coffee from vintage china while the perfume of roses wafts around you.

Try a Scones and Tea with clotted cream and lemon curd, a Sweet Fairy Tea Plate of tantalizing treats, or a Savory selection of local cheese and paté.  All menu items feature freshly baked goods and Tangled Garden jams and jellies.

Wolfville is home to Acadia University, described by MacLean's Magazine as one of the best liberal arts universities in Canada. A sprawling, green 250-acre campus is home to historical buildings dating back to 1838. As a defining feature of life in Wolfville the University offers opportunities in arts, athletics, and more to Wolfville’s citizens.

There's something about Wolfville that is, well, indefinably satisfying to all who live, study, work or visit. We could try to define it by mentioning how our sustainability sensibility, blended with our intense sense of community, make this place immensely rewarding to visit. Or how our cosmopolitan but charming centre, blended with the wine country that surrounds us, provides all the finer things one looks for out of life. We could even point to the beautiful landscape--hills, valleys, rivers, and ocean coming together as the perfect wallpaper. But we find the best way to understand Wolfville is to experience it. And those who experience our town do not forget it.  Come and Experience Wolfville and create your own definition! 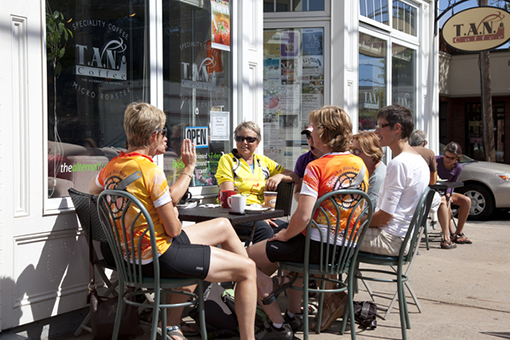 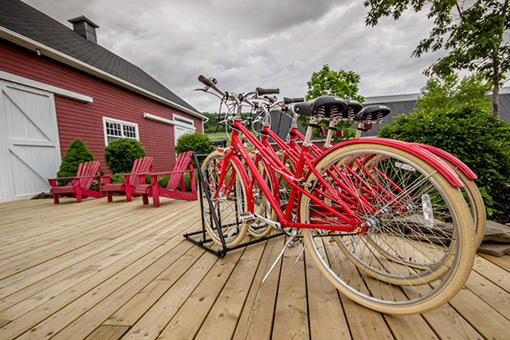 No one celebrates food better than we do in Wolfville. With many a celebrated chef in the region, and situated in the heart of wine country, Wolfville has no shortage of spectacular restaurants. Driven by a focus on the value of local, quality food, influenced by sustainable practices, and with an emphasis on complete culinary enjoyment, the dining scene in Wolfville will appeal to the foodie in all of us. 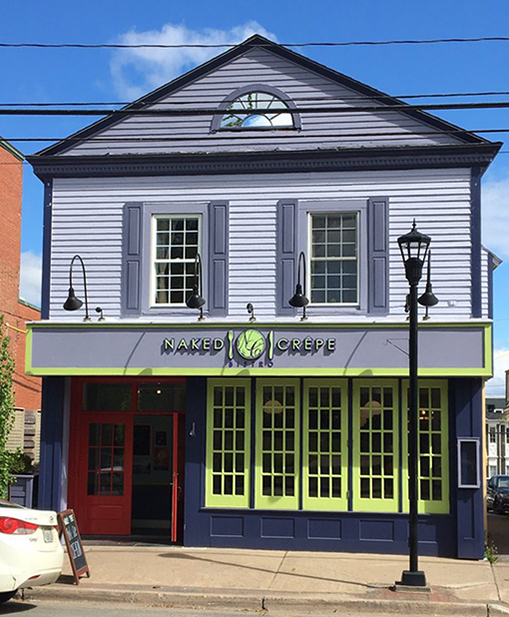 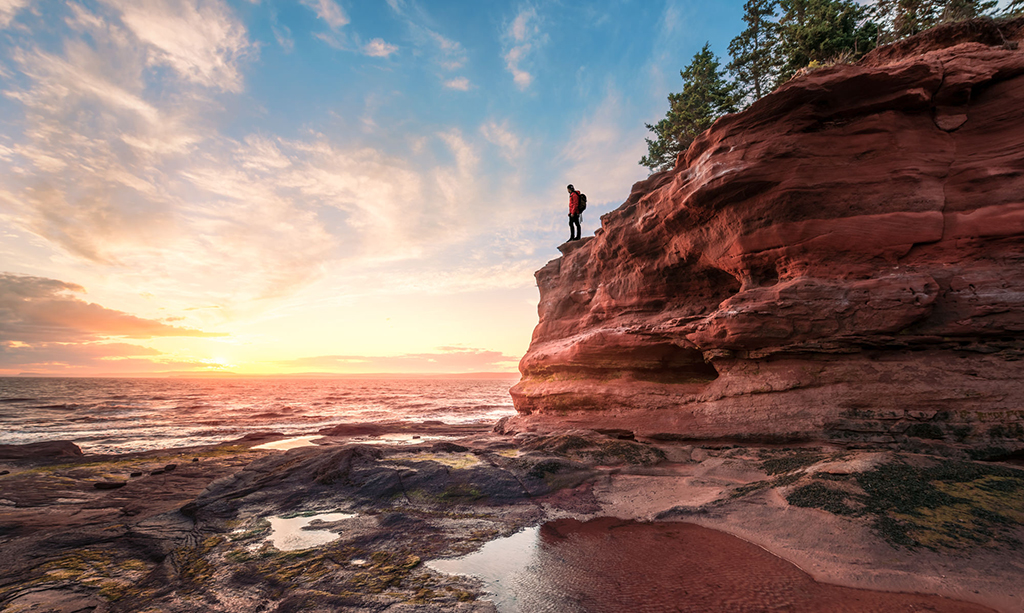 Walk down the stone stairs to the ocean floor to see fossils, tidal pool creatures and the impact of the powerful tides on the coastline. During the tour, the tide will ebb to its lowest point and begin rising again. As the tour ends you will be guided to the ocean floor dining room and your seat with an amazing view. 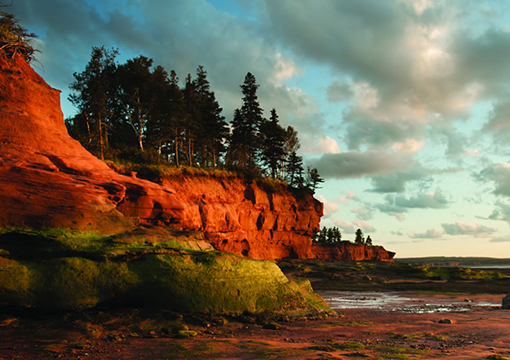 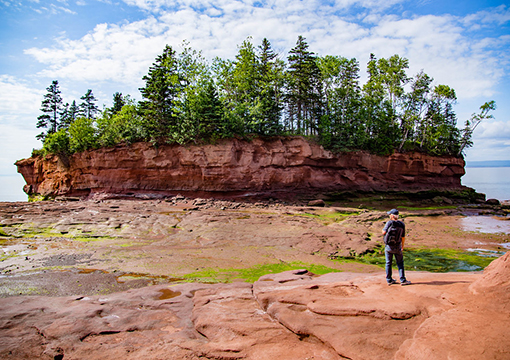 Looking up at the high tide marks on the surrounding cliffs and island, you’ll be awed knowing that the area will be covered in 50 feet of water in less than 6 hours! 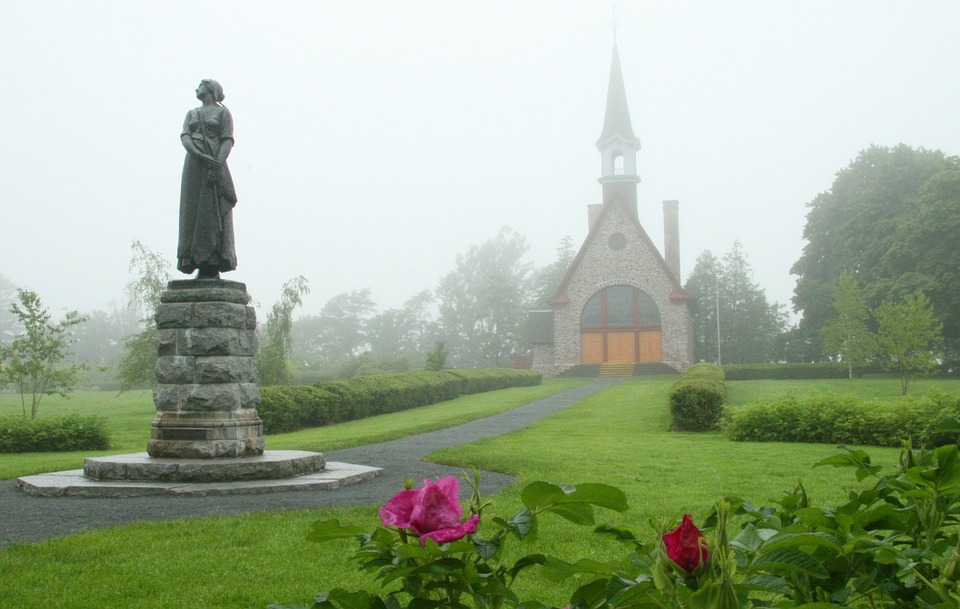